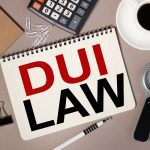 The new session for Florida’s legislature begins in January and lawmakers are expected to take up a new bill during that time. The bill would expand the DUI laws of the state and would be debated first in the House and then in the Senate. Currently, the language in the law makes it illegal… Read More »