Options for Getting a Spouse Out of the Home 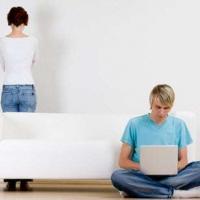 When a relationship starts to go south and spouses begin to consider getting divorced, an early question in this process is often who will stay in the family home and who will leave. This issue can become a huge point of contention, as both spouses likely have rights to be in the home, usually through being listed on a lease or home mortgage. Ideally, the couple can negotiate an acceptable resolution in which one will leave without the need for court intervention. However, if both parties are committed to staying, and neither wants the other one to remain, what can a spouse legally do to remove the other spouse from the family home? The answer to this question involves a number of practical and legal considerations that will greatly determine which avenues are more likely to produce the desired result. A discussion of what a spouse can do on his/her own to compel the other side to move out, as well as when a court will order the removal of a spouse from the family home, will follow below.

Options on Your Own

Regardless of who is listed on the lease or mortgage, both spouses are residents of the home, and have a legal right to stay. Thus, police will not forcibly remove a spouse merely because the other spouse does not want them around. Further, changing the locks will only provoke police to order a spouse to return access to the other, as without more, this is considered a civil matter that police cannot settle. Seeking to evict is also a less than advantageous option because it will only further antagonize the situation, and likely delay the other spouse from vacating, often just to spite the other party. Compromising and seeking to work out a solution privately is frequently the best, and in some instances only, way to get a spouse out of the family home. However, it is possible to petition the family court to order a spouse out under certain circumstances.

A spouse involved in a family court dispute has the option of requesting the “exclusive use and possession of the marital home.” Getting this request granted is not necessarily a given, and will require the presentation of convincing evidence that one of two situations exist to justify court intervention: domestic violence or the best interests of a child. Evidence of previous violence or the threat of imminent violence may be enough for the court to order the other party to vacate, but more likely, a judge will expect to see a domestic violence injunction before taking this step based on possible harm. If a child is present, a court will grant one parent exclusive use of the home if the best interests of the child demand it and it would be a detriment to the child if the other parent stayed. Examples of behavior/factors that support this request include:

As this discussion shows, removing a spouse from the marital home will require a compelling reason if spouses cannot agree. Thus, couples should do everything possible to settle living arrangements privately, an issue a divorce attorney can very much help to resolve, so it does not unnecessarily delay the progression of the divorce case generally.

Divorce is a complicated event that involves a number transitions by both spouses. If you have concerns about your divorce and need reliable answers, talk to the attorneys at All Family Law Group, P.A. They bring a sensitive and dedicated approach to all their cases, and can help you get the outcome you need.  Contact the Tampa divorce attorneys and family lawyers at All Family Law Group, P.A. in Tampa Bay for a consultation at no charge. They can be reached at 813-672-1900.