Does a Criminal Conviction Matter in a Divorce? 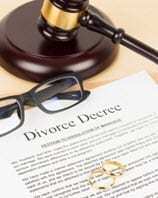 Everyone makes mistakes in life, but most are minor enough to allow for the possibility of forgiveness. Others, however, that are serious enough to produce criminal charges and a subsequent conviction, are harder to forgive and forget, and in some instances, should not be. Spouses who find themselves involved with the criminal justice system may soon find themselves also dealing with divorce. Knowing that a partner made a decision egregious enough to be convicted of a crime, particularly if the offense was violent, is almost impossible to move past, and most often destroys any level of trust that existed between the couple. Since Florida is a no-fault divorce State, meaning proving misconduct of a spouse to justify is not necessary and is rarely relevant to the outcome of the case, does an event like this have any effect on a court’s view of outstanding issues? Domestic violence is the most prevalent example of the type of crime that could instigate a divorce, and for good reason, but as another example, a woman convicted of murdering her boyfriend is now in the middle of a divorce from a woman she married while awaiting trial for that offense. Whether a criminal offense will directly impact the outcome of a divorce depends upon what it was, including who was victimized, but even those not directly connected with the couple or family can influence how a court rules.

Courts are principally concerned with the best interests of a child if custody issues are present in a divorce case. This means determining what type of decision-making and parenting time arrangement is most appropriate for the child’s wellbeing. For most parents, this involves sharing these responsibilities, and this dynamic reflects the legal preference for child custody. However, anything determined to be a detriment to the child can alter the division of parental responsibilities, and as part of the list of factors a court must use to assess the best interests of the child, evidence of the following offenses would go against approving any allocation:

The commission of a crime that impacts the safety of the child, especially if the child was the victim, is almost certain to result in supervised visitation, if not a complete prohibition on all contact. Even violent crimes against others that suggest a propensity for aggression could produce the same result. Further, the parent’s rights could conceivably be terminated if any continued connection with the child is deemed against the child’s best interests. The impact of other types of crimes will depend upon the circumstances of a particular case but could still be dispositive.

Criminal convictions rarely have a direct influence on a court’s view of property division, unless there was a fraudulent transfer of marital assets, but they can still convince a judge that an unequal division is necessary for fairness. Any act by a spouse that hindered the other spouse’s ability to earn income, caused the dissipation of marital assets, or affected the accumulation of marital property could persuade a judge to give the innocent spouse a greater share of the marital estate. For example, a domestic abuser who prevented the victimized spouse from getting an education, working outside the home, or having access to money can be sufficient to justify giving him/her a greater share of the assets. As with any legal issue, the facts of each case very much drive the likely outcome, so a divorce attorney should be consulted to determine the options in every case.

Criminal convictions by a spouse is a serious matter, and if you have questions about the impact of this behavior on your divorce, speak with the attorneys at All Family Law Group, P.A. about whether this information should be brought to the court’s attention. Bad behavior may not be grounds for divorce, but it can affect how the divorce settlement is structured. Contact the Tampa divorce attorneys and family lawyers at All Family Law Group, P.A. in Tampa Bay for a free consultation. They can be reached by email or call 813-672-1900.