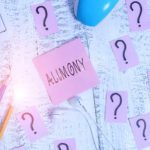 What Qualifies You For Alimony In FL?

When getting a divorce, it is not uncommon for one spouse to consider asking for alimony. Contrary to what many people think, alimony is not only awarded to women in divorce cases. Either spouse can make a request for alimony if they are unable to support themselves during the divorce, or afterwards. If you… Read More »

Alimony is money that is paid by one spouse to the other during or after a divorce. There are several types of alimony, also known as spousal support or maintenance. Whether you will get paid alimony will ultimately be determined as part of your final divorce settlement terms. While alimony was often a common… Read More »

What is a Florida ‘Collaborative Divorce?’

The process of ending a marriage can be emotionally difficult for everyone involved. In addition, many divorces are extremely acrimonious and contentious, with some couples finding it very difficult to communicate with one another. There are many issues related to a marriage that must be sorted out in a divorce, including the division of… Read More »